1990S JEWELRY STYLE (HOW TO RECREATE THE LOOK) 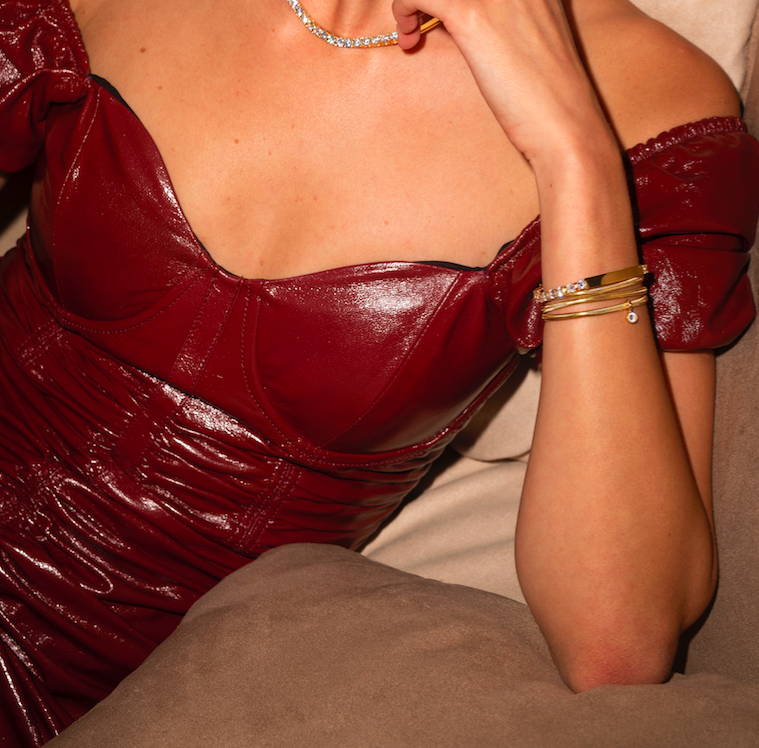 From popular TV shows in the 90s like 90210, Clueless, Friends and Baywatch, this decade had it all. We all symbolically danced the Macarena together and drank the style Kool-aid in our spaghetti straps. Every decade had a dance craze, and we were all Gettin’ Jiggy With It and Livin' La Vida Loca while dripping in 90s style bling.

Let's take a look back at some of the most popular jewelry styles from the 1990s...

The diamond necklace trend was beyond fly in the 1990s for one big reason: Titanic. Ruby earrings, pearl bracelets, diamond bracelets were all featured prominently in the epic romance movie and became instantly trendy.

Another reason for this hot trend is that several popular celebrities were spotted wearing luxe pieces in the mid-1990s. Mega stars of the 90s, including Janet Jackson and Mariah Carey, embraced diamonds as their signature pieces. Consequently, necklaces were worn as the ultimate status symbol and big bold statement necklaces were all about the flashing bling. They were longer, chunkier and dripped with diamonds.

Did you know that choker necklace were the fashion accessory no woman could go without in the 90s? Even celebrities like Jodi Foster, Cindy Crawford and Drew Barrymore wore them! They were also featured in a lot of movies like The Craft, Little Women, Titanic and of course Pretty Woman.

When it came to the 90s necklace choker trend, there was always a style for everyone. Some chokers in the 90s were big and bulky for a more heavy metal look, while others were dainty and looked like something out of the 1800s. 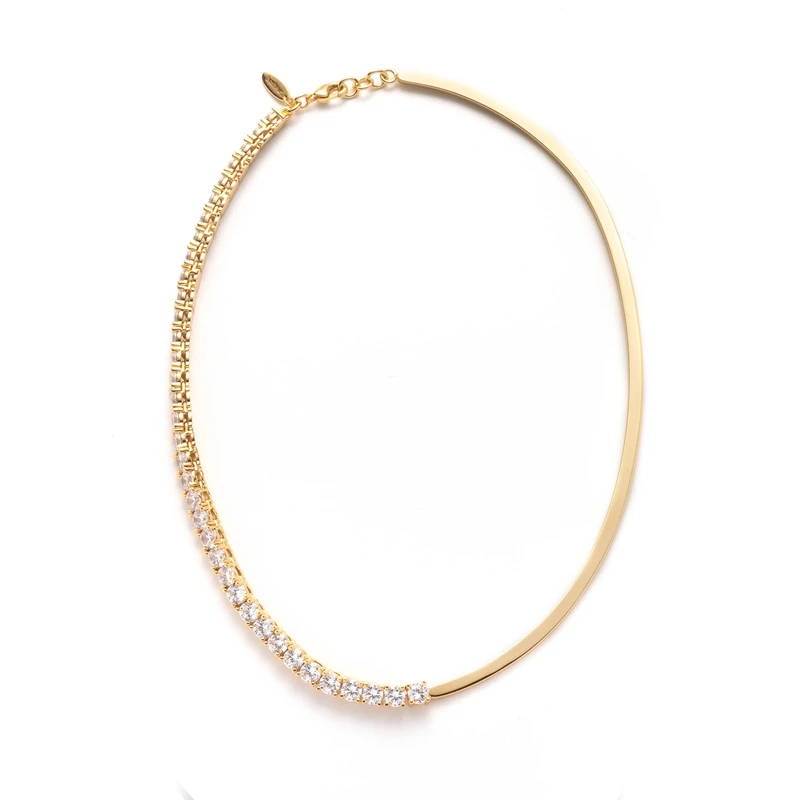 The early 90s started a new era for long chain pendant necklaces. Their popularity was greatly influenced by 90s r&b and hip hop artists such as Lisa “Left Eye” Lopes, Salt-N-Pepa, Missy Elliott, MC Lyte and many others. Not only did these amazing works of art make an appearance on the necks of the biggest names in 90s music, but they also appeared in music videos and were worn day to day by teenagers across the country. These costly chains became an accessory on their own, hanging lower than one's belly button and solidified with either a solid silver or diamond pendant.

Moreover, pendant & medallion necklaces captured the decadence of the era and were worn with pride. In the 90s, your oversized pendant necklace was a testament to your success. On the streets of New York, on the red carpets of Hollywood or around the neck of every girl in your grade, it was impossible to not notice a gleaming chain necklace.

Likewise, chain link bracelets ruled wrists. If you ruled the middle school hallways in the early 90s, there’s a pretty good chance you owned a matching chain link bracelet. It wasn’t an optional accessory at all, you just weren't cool if you didn't have a fly bracelet to match your heavy, oversized chain necklace.

The customized gold nameplate necklace became a hot trend in the 90s because so many TV show characters wore them. The most popular nameplate necklaces were worn by Blossom on "Blossom" and Angela Moore on "The Fresh Prince of Bel-Air."

Letter necklaces came in different styles and materials. Some of them displayed a beginning initial or a word from a popular phrase, while others were simply a nameplate engraved necklace with anything from a child’s name to that of its owner. 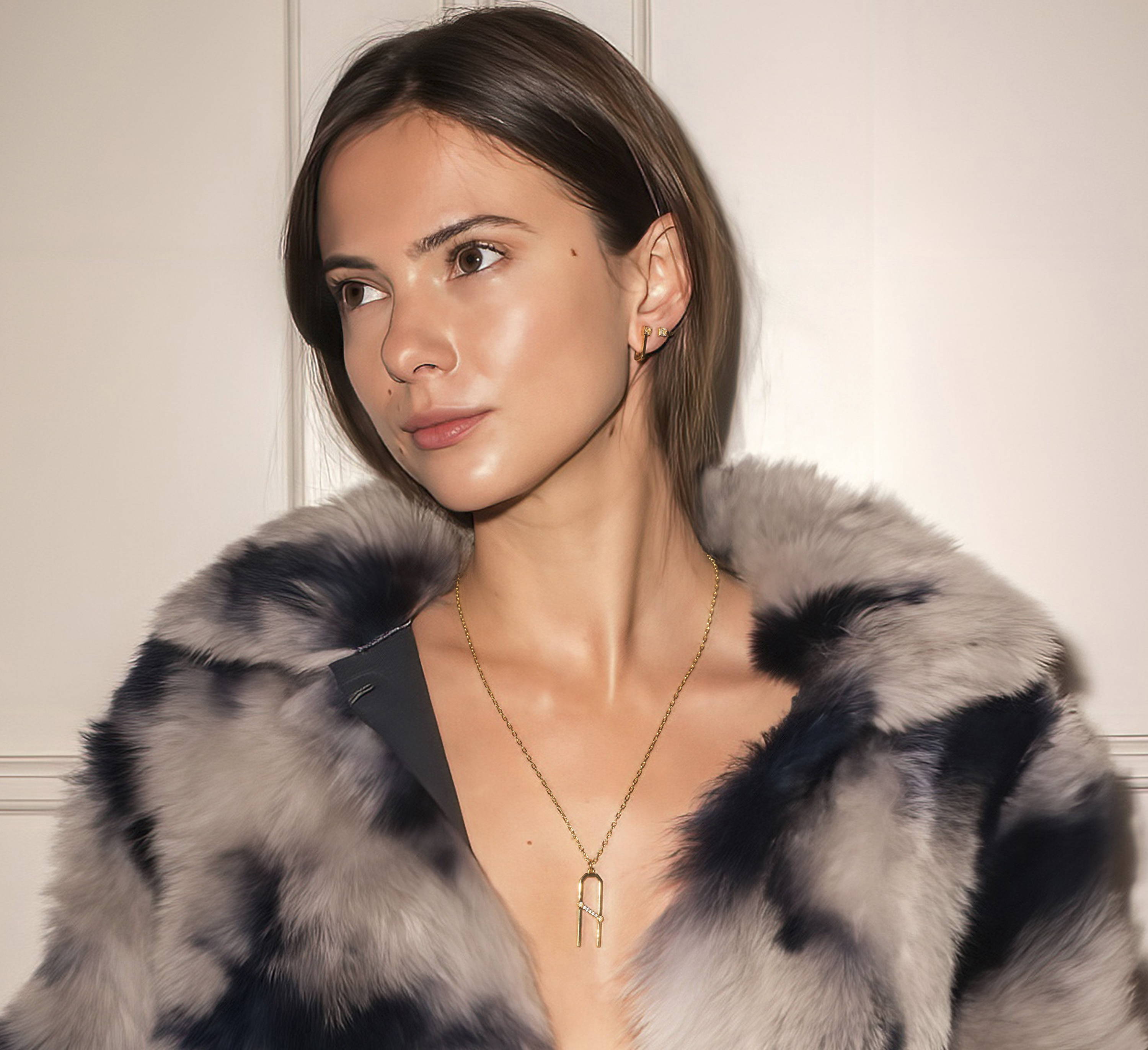 In the 90s, huge chandelier earrings were a popular trend and something not a lot of women could pull off. If you were rocking it, you can thank Sandra Bullock in Miss Congeniality for that one.

Every woman was crazy about chandelier-style earrings in the 1990s for many reasons. Not only did huge chandelier earrings provide a burst of color to the face, but they gave 90s women an elegant sassiness that let everyone know they were independent women—even if they had young kids at home and didn’t have time to go out much.

Another reason chandelier-style earrings were the hottest accessory on the market is because they looked fantastic with all different kinds of other big jewelry pieces--pendants, cuff bracelets, statement necklaces-and that's part of what made them so appealing. Thankfully, many of these large and heavy ornate styles were clip on earrings, making them easier and much lighter to wear.

The 90s were a strange time for fashion and nowhere was this more evident than the ever-present hoop earrings of the era. Very large hoop earrings grew in popularity around 1996. They were often hinged hoops and were usually large enough to cover the wearer's entire ear lobe and sometimes even the upper portion of the outer ear.

Loved by many because very large hoop earrings à la Blossom or Clarissa or even Lisa "Left Eye" Lopes really accentuated 90s women's outfit choices. I mean, after all, they were HUGE and 90s women needed a little extra something for those oversized graphic t-shirts that they rocked.

Glitzy studs were big in the 90s and beloved by women & men alike. They were simple, easy to put in and take out; no issues at all.

Have you ever wondered why stud earrings were so popular in the 90s? It was mostly thanks to the Spice Girls. When trendsetter Geri Halliwell came out wearing her signature earrings almost every woman wanted a pair of her own. In the 1990s, geri-isms were everywhere from her “babyshambles” dress, Union jack gear to her glimmering stud earrings.

Moreover, sparkling studs were a staple for many other fashion icons including Madonna, Drew Barrymore and Jennifer Lopez. While choker necklaces were trending, it wasn't uncommon to see chokers paired with simple stud earrings. 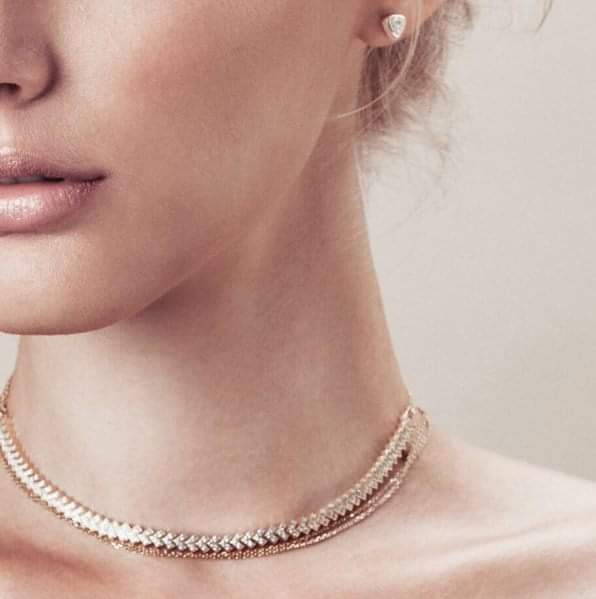 Diamonds were on everyone's fingers. The 1990s era featured round rings that showcased a flashy evolution of diamond shapes. The 90s jewelry business changed with the addition of prong-settings and halo settings, which allowed jewelers to make bigger, more extravagant style rings.

In the 90s, you couldn't go to a wedding without seeing the bride sporting an enormous, sparkling cluster ring on her left hand. A number of celebrity couples added their own unique embellishments to the style, like double bands or rows of diamonds, but they all had one thing in common: They were really big in size.

Not surprisingly, cocktail rings in the 90s became the ultimate "go-to" jewelry accessory. While today's cocktail ring styles are just as on-trend as their predecessors, they tend to be a lot more subtle (unless you step-up the bling factor). Glamorous cocktail rings were worn by Hollywood trendsetters like Gwyneth Paltrow, Madonna and Winona Ryder, making the dramatic ring style cool again with 90s women.

Non-jeweled rings in the 90s were also large and ornate. Thick bands with different sized, interconnected hoops were a huge hit with younger adults. As were pinky and signet rings. Signet rings were often received by students from schools featuring a shield with a rad letter like "S" on it. The "S" stood for "school spirit."

A sparkly new 90s trend featured rhinestone crystals, hanging charms and dazzling colors that evoked the energy of the decade emerged. The charm bracelet craze in the 90s was so intense, every girl wanted to have one and every girl wanted to have all the charms that could be put on her bracelet. Girls began collecting charms that meant something special to them. They collected charms from their families, from their favorite TV shows or books or movies or sports teams or just cool looking charms.

Also, gold bangles were plastered on arms throughout the nation. They were everywhere. They came in all shapes and sizes and were seen on almost every female celebrity from 90s pop stars like Jennifer Lopez to reality TV starlets like Jennifer Aniston.

The aesthetics of the 90s sure was different. Grunge was king, sportswear chic was huge and people were really into exposed abs. What does this have to do with body jewelry you ask? Well actually quite a lot. The 1990s saw a big change in how body jewelry was worn (and its practicality).

Did you know that in the 90s, there were many celebrities who wore body jewelry? 90s pop stars like Britney Spears, Christina Aguilera, Jessica Simpson and Pink were some of them. They sported accessories like floating naval piercings resembling diamond dots with everyday attire and made it acceptable for others to do the same. Parents had no problem with their children wearing them because they had been advertised by popular celebrities. And then there was even an episode of Beverly Hills 90210 devoted to the issue!

Whether you were wearing an earring in your nose, a long body chain necklace or multiple piercings on each ear, body jewelry is one of those trends that never seemed to go out of style in the 90s.

Long anklets were also a huge trend in the 90s. Ankle bracelets were often worn with jeans and sneakers. They matched well with a variety of outfits, making them an essential accessory for most 90s women. They would be worn on one ankle or both and were used to show off the wearer's favorite colors, often paired with laced-up shoes.

Often, 90's jewelry didn't follow trends so much as it just fell into popular fashion because that is where society was at that moment. While everyone seems to have a different idea of what "90s jewelry" really means, there are some trends that stand out more than others. Chokers, charm bracelets, gold hoops, and oversized door knocker earrings are all examples of popular 90s jewelry fads.